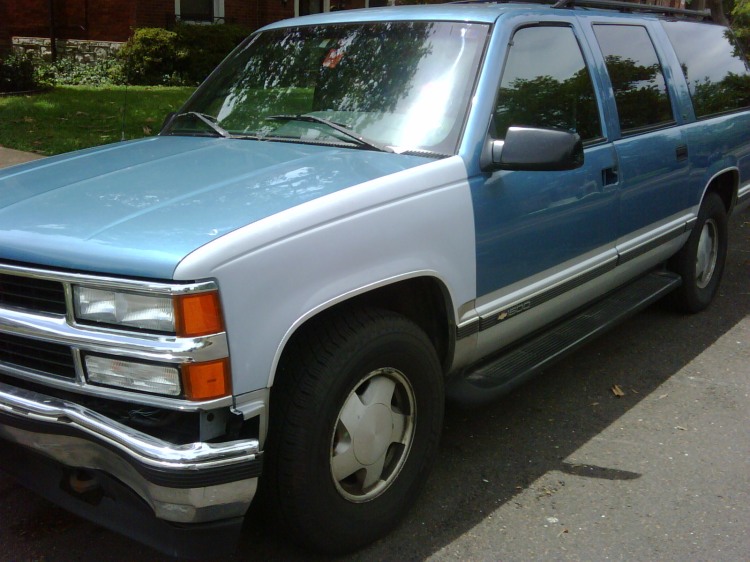 To Whomever Broke Into My Car A Couple of Weekends Ago,

My name is Zack, and I’m the owner of the car you broke into a couple of weekends ago. Let me start by saying this immediately:

I am so sorry.

It appears as if it was an unsuccessful heist. Unless, of course, it was your sole goal or mission to simply rip the driver’s side doorhandle off with a crowbar, and throw all of the contents of my glove boxes and consoles around the entirety of the vehicle.

I can’t blame you for breaking into my battered, 1995 sky blue Suburban. Despite the 270,000+ miles, four miles per gallon mileage, no air conditioning, often-faulty breaks, and the stench of a 1,000 nights of sweat, vomit, and tears – we both know that this beauty is QUITE the find. I take pride in knowing full well that you may have actually considered stealing this car, taking the august majesty on wheels for yourself, although, I’m pretty sure that due to its complete and utter lack of anything resembling power steering, you would have driven it into the nearest building.

You, sir (madame?), may have dodged a bullet there!

I’m so very sorry that you didn’t find what you were looking for. I’m sorry that my mixed CD’s from high school (Zack’s Mix: Volumes I-XI) and my parents’ (the original owners of the vehicle) Christian Evangelical literature wasn’t enough for you. Do you know about Jesus Christ? Do you know about Third Eye Blind? It appears that you have had your fill of both of them.

I’ll be fine. Clearly, by driving my vehicle that, due to a previous “accident*” , appears as if the car itself has had a stroke, I’ve got A LOT going for me. This change in my day-to-day routine, where I now have to crawl in the passenger’s side door, sweat profusely, and then climb over the center console, spinning and rolling like a fat ninja, is AWESOME. I can’t think of anything else I’d rather be doing every time I need to drive, especially not “getting into my car through the driver’s side door without incident.”

(* – Some redneck woman with more tattoos than she had ounces of liquid dignity ran a red light trying to rush her likely illegitmate daughters to school, then gave a Tony (TM) Award winning performance that made it seem like I was the one who made an illegal left turn into her van of maternal love, which was actually a Firebird, and which has almost certainly been reposessed. That was also a good day!)

Again, so sorry it wasn’t a successful break in, and that the baseball glove in the trunk is left-handed. You probably thought “Jackpot!” until it went on the wrong hand. Can’t win them all, can we? Seriously, though, better luck next time. Hang in there, and you’ll get ’em next time.

PS – You should also know that in the future, I intend on becoming a time-traveling vigilante, navigating the space-time continuum in the name of SWEET LADY JUSTICE. Be forewarned that I plan on traveling back in time to that Friday night a few weekends ago and giving you a case of airborne future-cancer which symptoms are highlighted by brittle bones and making you shit out of your dick. If you heard maniacal laughing in the night’s distance, that was likely a future version of myself. xoxo Zack.

2 thoughts on “To Whomever Broke Into My Car A Couple of Weekends Ago: I’m So Sorry”