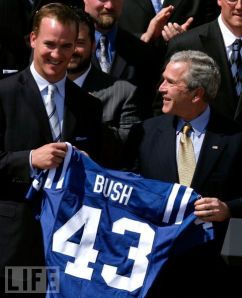 Whoa, there, mindless fan! Don’t think you can escape the non-stop monkey chatter of contemporary American politics by escaping into the brutish serenity of athletic competition. The two are related! Don’t you get it, you FOOL?! Now, take some time to write your congressman or woman about how FED UP you are with the status quo in Washington, or better yet, donate money to this campaig-

Gotcha. April Fool’s! You thought it was going to get political, didn’t you? You did? That’s silly! Sports and politics have very little in common other than rabid profanity and the occasional dirty player. However, one political think tank has polled 218,000 sports watching individuals to tally if and how they would vote as a sports fan. Mildly interesting stuff for a Thursday morning.

Not Duh, But It Makes Enough Sense

(As originally published on The Ghost of Roy Hobbs, your source for sports and culture analysis from the Natural himself.)

One thought on “Wait! There Are Political Implications To That Game You’re About To Watch Drunk!”