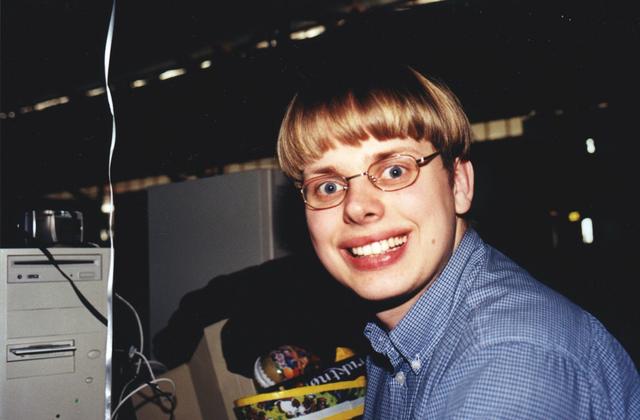 CLEVELAND, OH – In the wake of a recent fad of self-mutilation, known in many circles as “cutting,” 5′ 4″, 91 lbs. senior Ernest Rittelmeyer has been deemed cool enough to be elected as Homecoming King for Benjamin Harrison High School in Cleveland as a direct result of his chronic nosebleeds.

Rittelmeyer’s social status began to rise dramatically with the increasing popularity of vampires and blood sport seen in novels and film, such as Twilight and TruBlood. “Frankly, my nosebleeds have always been a secondary concern of mine,” said Rittelmeyer, after twitching/winking at a gaggle of cheerleaders walking by. “Asthma was third. ACTs and National Merit Semi-Finals were co-No. 1.”

“Omigah, Ernie? HE’S SO DARK AND HOTT WITH TWO T’S AND HAWT WITH A ‘W,'” said head cheerleader Tammy Tubaleski, who looks up to cutting enthusiasts such as Disney star Demi Lovato. “I can’t believe I’ve NEVER seen him, his blood, or his bowl-cut before this year. I wanna pick him up and take him back to my dad’s Suburban and then to the mall and junk.”

“Yeah, Ernest is kinda weird, I guess, and dark, and stuff, but girls like him,” says star Quarterback and father of two Kyle Case-Kyle. “He’s alright to hang with. Just sort of weird and dark. But cool. I guess.”

Rittelmeyer, who is prepping for a Magic card tournament to take place at his local library immediately prior to the homecoming dance, said he calculates his odds for touching a willing female’s breast has multiplied nearly 800 percent in this short time.